Water shortage: the next global challenge

Water is the source of life. However, due to growing population, increased economic wealth and climate change, water shortage is becoming a larger problem every year. Communities and farmers across the globe are struggling with reduced rain fall and empty reservoirs. Climate change is turning fertile lands into deserts.

Inspired by plants and animals in dry, coastal areas, Sponsh developed a temperature-sensitive textile that collects water from air. When cold, the material collects large amounts of water from the air. As temperatures rise, the fibres autonomously repel the water. Producing abundant water again and again. Without adding energy, fully off-grid and affordable.

Sponsh focuses on areas where drilling more water wells or getting more water from municipalities is not an option (anymore). These areas are growing every year. Most recent examples are South-Africa and California. In that case, farmers cut down their trees, close or move their farms, or have to get very expensive water from other areas. Sponsh material is competitive with desalination water and significantly more economic than other water from air systems. Demand for the product comes from around the world: Portugal, Spain, Lebanon, South-Africa, Romania, Cape Verde, Kenya, California and Uruguay, amongst others. 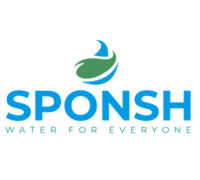