Taking a traditional growing layout of having 8 standard size beds of 1.5m wide between Irrigation lines, Dicky Bill Australia is redefining intensive horticulture by having moved to a bespoke 6 bed configuration at a 2.5m bed width.

What created the desire to change?

The challenge to achieve a low-cost base for industry leading mechanized salad production was the key driver for the project on wider beds.  Changing from 8 beds per irrigation bay to 6, allowed for further mechanization with ground prep, by being able to prepare 3 beds at a time in a 2 x 3 configuration using much bigger machinery.  The business would previously have to prepare 8 individual beds but is now able to prepare 3 beds at a time.  The running cost of machinery is comparable between 1 larger tractor verse the 3 smaller tractors to achieve the same result, with labour costs reduced by a third.  A further efficiency gained was now being able to have the ability to several processes in the one pass, such applying fertilizer at the same time as a rotary hoe pass.  Further advantages have been the increase of arable land.  Due to having less passes which equals less wheel tracks, Dicky Bill Australia has seen an increase of existing land use 19.8%

Why is the project unique?

The innovation is unique by far exceeding the industry standard in the wheel base dimensions of the operating machinery. Dicky Bill Australia had to design and engineer the mechanized harvesters which were at the centre of the project.  The company used to build the harvesters are based out of the Salinas Valley in California.  Industry standard for the machines is 1.8m which was quite a big leap out to the 2.5m

Straight away a 19.8% increase in arable land equates to a translatable dollar value.  Let alone the labour savings and general efficiencies.  There is also water and environmental value in the there being less wheel tracks being watered and allowing for less runoff as a result.

Efficiencies in salad production worldwide.  Could also be translated to many other horticultural lines. 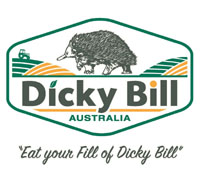