Fonterra invented a mozzarella-making process that gets Kiwi cheese onto more than half the pizzas in China!

At Fonterra’s Clandeboye factory in South Canterbury, New Zealand, is a one-of-a-kind plant capable of churning out hundreds of tonnes of delicious, stretchy mozzarella—enough to meet the massive demands of the swiftly growing pizza market in China. Delivering that sort of volume isn't easy, but scientists working at the Fonterra Research and Development Centre (FRDC) made a breakthrough that makes it possible. They invented a way to reduce the usual three-month mozzarella-making process down to just six hours.

Discovering a process to make natural mozzarella so quickly took years of hard work by a team of researchers led by Keith Johnston, Fonterra’s principal research technologist. The patented individually quick-frozen mozzarella (IQF) has been a game changer for the global co-operative. In such a competitive industry, the process itself remains a closely guarded secret—so much so that even some of the staff working at Clandeboye aren’t allowed into the room where the magic happens.

What isn’t a secret is the quality of the mozzarella being produced. Even though the technology involved has vastly sped up the process, the cheese itself remains all natural.  It’s known for its great taste, texture, and extra stretch.

This single innovation has been fundamental in securing Fonterra cheese as the topping on more than half of all the pizza’s sold in Greater China. A $240 million upgrade of the Clandeboye factory is well underway, which is set to make Fonterra the largest manufacturer of mozzarella in the Southern Hemisphere. Today, the mozzarella plant runs 24 hours a day to keep up with demand. 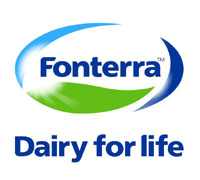